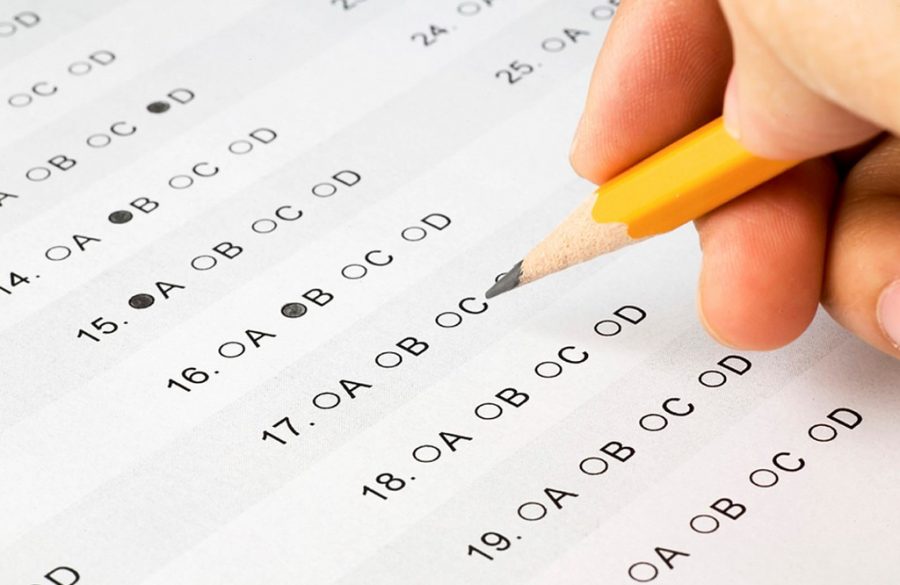 As I walked into the classroom expecting a normal economics lesson, I noticed something was off—yellow name cards sat on every desk, backpacks were piled at the front of the room, and the general look of disgruntlement shone on the faces of my fellow peers. “Oh right,” I thought to myself, “another one of these things.” It’s true that any surprise standardized exam kills the mood faster than a bad joke, but I had more reasons to dislike the newly incorporated California Assessment of Student Performance and Progress (CAASPP) standardized exams for more reasons than just the fact that it was an exam. Ultimately, the CAASPP is poorly implemented and highly ineffective at assessing student achievement because it lacks an incentive, tests arbitrary content, and puts students who have not taken certain coursework at a disadvantage.

Perhaps the greatest fallacy of the CAASPP is that there is no reason for students to want to perform well. Results of the test have little to no effect on a student’s academic record, college admission, or career opportunities and thus students are not motivated to do their best. While the state attempted to incentivize performance on the exam by offering Early Assessment Program (EAP) placement for future Community College and California State University students, the exam had no effect on admission or placement for future students of the University of California (UC) or private colleges.

Accordingly, a majority of seniors did not take the test seriously whatsoever; as one of my friends put it elegantly, it was a “relaxing morning of hitting the ‘tab’ and ‘enter’ keys on the keyboard for half an hour.” Yet others didn’t take the exam at all, calling in absent, sending in exemption notes, or simply not bothering to show up. This would result in inaccurate assessment of the school’s academic performance, which defeats the purpose of the exam.

In addition, the test had many questions that were simply fact-based and required regurgitating memorized information rather than conceptual understanding of a topic, especially the multiple choice questions. Test designers attempted to combat this by including short response sections requiring students to explain certain processes or concepts; however, these questions lacked clear grading criteria and accordingly, the scoring of these sections would end up being somewhat subjective.

Furthermore, the decision to sample 12th graders on a science exam this year was seemingly ill-advised, especially considering the wide range of science levels and plethora of course offerings in the field. While many students go on to take three or four years of sciences, often taking on college-level AP coursework, the California state high school graduation requirements require only two years. Many students complete Biology and Chemistry and satisfy this requirement, which means that they never end up formally taking Physics or Environmental Sciences in high school.

The test, however, did contain content from a physics course, such as conservation of linear momentum and Kepler’s laws of orbits. While not exceedingly difficult, one would usually need to have learned these concepts and seen sample problems beforehand in order to answer the questions correctly.  There were also content-specific questions about tectonic plates and meteorology, which would require a background in environmental sciences to answer. In addition, the test contained many questions usually taught in college-level Biology and Chemistry courses, with problems like comparing a set of DNA sequences to construct a phylogenetic tree (a skill only taught in AP Biology) or finding the half-life of a chemical reaction. Again—there was nothing too conceptually challenging, just knowledge that one would need to study in order to perform well on the test. Clearly, this exam did not assess what students learn in school, since students take different science classes over their four years in high school and have different experiences.

It is unfair to expect students who have not taken courses in the field to do well on course-specific content. Many students who take more advanced courses in Humanities may take easier courses in STEM to balance their course load and look into what they are passionate about and/or want to pursue a career in. However, the test only assessed science knowledge, which gives an unfair disadvantage to people who want to go into humanities—simply because of different interests or career goals. In addition, the fact that the assessment was computer-based gives an unfair disadvantage to students in schools that serve lower-income communities, as they may not have ready access to technological devices at home or in school.

Clearly, the CAASPP assessment was ineffective and poorly implemented. However, standardized tests are necessary for the states to conduct in order to track educational progress in the schools and identify areas of weakness.

To improve their efficacy, state-run standardized tests should be administered every year to ensure continuity. The standards covered on these tests should be clearly communicated to teachers and school administrators to allow them to design curricula and course sequences to meet these standards. While the former STAR (Standardized Testing and Reporting) program was relatively effective in this regard, the new influences of Common Core and NGSS standards called upon states to redesign their testing schemes. Accordingly, each year, only a select few students take standardized tests, which does not allow for the states to follow through with the school curricula for each grade. Furthermore, students who take the test every year would gain more experience with the test format and be in a position to perform better from year to year.

In addition, state exams should be linked to admission and placement in state-run public schools in order to incentivize student performance. Rather than having to take the SAT or ACT, students should be able to submit results from the state standardized tests to UCs and CSUs that they apply to. This way, the tests line up more closely to what students learn in school, and students who don’t enroll in private coaching or tutoring for standardized tests are not at a disadvantage. Moreover, students would be incentivized to perform better on the tests since the exams would impact their college decisions and career opportunities. This in turn would allow the states to collect more accurate data on student achievement.

Let’s face it: state-run standardized testing protocols have much room for improvement. The current exams lack an incentive for students to perform well, are too fact-based, and disadvantage students with different interests and backgrounds. In addition to addressing the issues of content and scope, the state of California should administer exams for all grades annually and allow students to use these exam scores when applying to public universities in order to accurately assess educational needs and improve the effectiveness of the exams.