Running a Marathon — for Fun 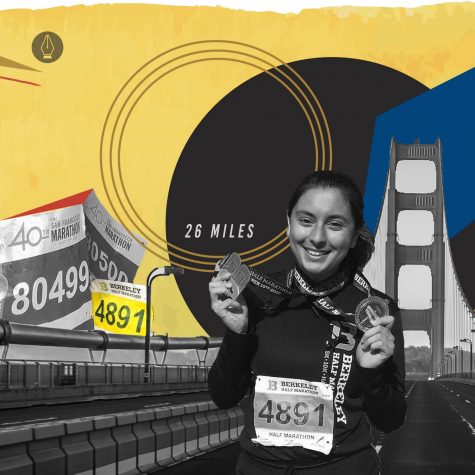 Breathe, feel the oxygen in your body. Exhale, let out your worries, regrets, concerns, pains, and just tell yourself to keep moving. My experience training for the San Francisco Marathon was one that I will hold close to my heart for the rest of my life. My brother and I decided to run this marathon, with Jake Fooks, a friend of his from college, in late April of 2017, which gave us a little over 10 weeks to train for this monster. Neither of us had run a half marathon, let alone a 5K. However, we both had experience with running: him a track and cross country runner and myself a soccer player.

We began running four to five miles every other day, completely exhausted after each run. Then we bumped it up to six miles every day, although we never really increased our weekly mileage from that. One day I looked at my calendar, horrified to see that we only had five weeks till the marathon. With this limited time we ran big runs every Sunday. We woke up at 4:30am, drank water, suited up in running clothes, tightened our laces, and were out the door running more miles every weekend. We began with our familiar six mile route, the next weekend we ran 10 miles. I cried eight miles into that run. The next weekend we ran 13 miles, and once again I broke down midway through that run. The weekend after my heart was crushed, I felt like I was not going to finish the marathon. But fortunately, I was not training alone. Every time I hit a wall or felt like I could not possibly push my body anymore, my brother always told me, “We signed up to finish this run, just keep moving. I know you are capable of this.” With this we woke up the following Sunday, and had the best run of our entire training, we ran 15 miles that weekend. I felt free and confident, running may not seem fun at first but the fact that we trained ourselves to run 15 miles in four weeks made me feel extremely proud of our achievements. There was one weekend left until the race, we ran 18 miles that Sunday. After this run I was sad because I knew after the marathon I would not run these long distances again with my brother, we had bonded so much during this experience and I am so fortunate to have had my best friend beside me throughout that gruesome but fruitful journey.

July 23, 2017: the morning of the marathon. We woke up at 3 am, drank lots of water and coffee, ate a banana and toast, and took three Advils each because we knew we would be in pain at some point. For our marathon outfits we wore running shorts, our finishers long sleeve t-shirts, coolmax socks, and applied tons of chafing cream (yes it is quite necessary). On our waists we had a running fanny packs which held carbohydrate gels, wet wipes, and our phones. We were out the door by 4:15 and we reached the city at 5:10. Our run kicked offat 6:02. All the runners were herded between two iron gates, the back gate locked and the clock struck 6:01. Soon the countdown began. Five, four, three, two, and the gates at the front of the line flew open and we were on our way into daunting the 26.2 miles that lay ahead of us.

The beginning of our run was absolutely stunning to say in the least. As we ran the short five mile route on the Golden Gate Bridge we were encapsulated in a thick and cooling layer of fog. By the time we ran the first mile on bridge we were completely soaked, and soon we were able to see the two towers on the bridge. The enormous structure, the incredible height, and the beauty of the bridge were amplified during the run. We eventually got off the bridge and made our way towards the Golden Gate Park. Before I knew it, we hit the 15 mile marker and my legs and body were more alive than ever; I was free to move and breathe through the wonderfully crisp San Francisco air.

Unfortunately, this feeling of freedom was short lived. When the mile 18 maker came into sight my legs gave out and my knees and ankles felt like they were being pulled out of my body. Between miles 18 and 23 is where runners usually hit “the Wall”, a point where they have burned through all of the glycogen stored in their body and rely solely on their muscles and fat to keep them going through the race. Fortunately, I was running with two other people so I was motivated to keep moving. We each pushed ourselves and climbed over that wall, and eventually hit mile 23. All that was left was to run the final 5k of the marathon.

There were crowds of people cheering every half mile, bands playing their instruments: all this excitement and positivity finally led us to the magical mile 26. The amount of energy my body had was close to nothing, but the amount of willpower I had left was infinitely greater than the start of the race. I opened my eyes, forgot about the pain, picked up my legs and arms, and sprinted as hard as I possibly could. We neared the final strip of the course where hundreds of cheering fans screamed as we sprinted past the other runners, down the red carpet, and into the glory of titling ourselves as marathon finishers. I ran straight through the finish line and turned around to see my brother and Jake. All we could do was hug each other and smile. The amount of joy I felt after finishing the marathon was something that could only be felt after pushing myself to the extreme and challenging every part of my physical and mental self.