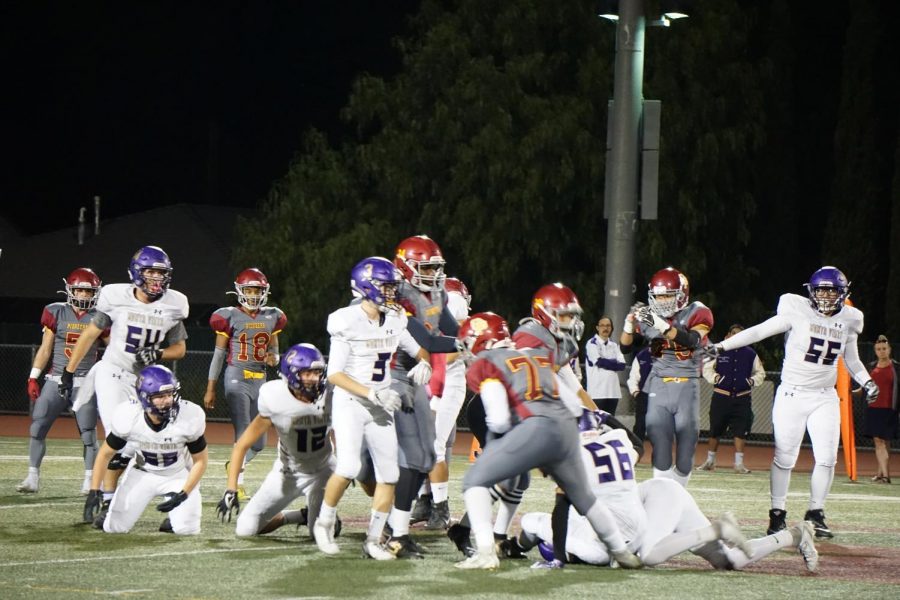 Everything was set last Friday, Oct. 25, when the Cupertino and Monta Vista football teams stepped onto the turf and got ready to begin the year’s annual helmet game. Students from Monta Vista were eager to see if their team could grasp the title this year, while Tino students chanted “Keep the helmet! Keep the helmet!”

The game began with a slow start for Cupertino, receiving the ball at the forty-yard line, but the team suffered a quick third and out and punted the ball deep into Monta Vista territory. Monta Vista wasted no time driving down the line back into their offensive half. They were aided by solid running routes from players 13, Owen Lassa, and 23, Tarun Sarang, down the sideline and into the endzone by Sarang, giving Monta Vista the early lead. The second drive did not fare much better for Cupertino, with the quarterback getting sacked and having hard time connecting passes. They eventually punted the ball, ending the first quarter 7-0 in favor of Monta Vista.

The Matadors began the second quarter with the ball, but were forced to a third and out and punted back into their offensive half. This began the third drive for Cupertino which showed promise since the team was successful by handing the ball off to number five, Jake Barbeau, who threaded his way through the Matador offensive line and down the middle of the field. However, the drive came to an abrupt halt when Cupertino fumbled the ball and Monta Vista regained possession.

With a convincing fake, Monta Vista threw off Tino’s defense and passed the ball off to the sideline for a sprint into the endzone, widening the score to 14-0 with the successful extra point. Tino held onto the ball for the rest of the first half, but their efforts were for naught and the halftime show commenced with the two teams retreating off the field.

Monta Vista started the second half with the ball. But was forced to try to punt the ball away. However, they were not able to successfully punt the ball away as the center offensive line failed to hike the ball and sent the ball spiraling backward and towards the Monta Vista defensive end zone. The punter was left with no choice but to leap on top of the ball to prevent a touchdown for the Pioneers.

This failed punt turned out to be the turning point of the game and the momentum swayed over to Cupertino since their drive began at Monta Vista’s 15-yard line. The Pioneers quickly scored a touchdown and converted the extra point, making the score 7-14 Monta Vista and beginning the comeback rally.

Monta Vista was now under pressure, but failed to deliver when they ended their drive with a punt back to Cupertino. Cupertino took full advantage of their field position by pushing into Monta Vista territory. After several key passes, Cupertino scored again and tied up the score at 14 – 14.

At this point, Monta Vista was unable to pull itself back together; failing to score and losing the ball once again with a fumble. The Pioneers traveled down the field, this time relying more on their passing game. Despite being held back from a touchdown, Cupertino was able to score a field goal, leading the game with the score 17-14.

With the game now deep into the fourth quarter and only five minutes left, Monta Vista began to increase the speed of play by passing more, which lead to a near interception. After an unsuccessful drive from both teams, Monta Vista conceded another fumble at the one-minute mark which ended their final attempt to score. Cheers erupted from the crowd and spectators were on their feet as Monta Vista relinquished the game — Cupertino won the Helmet game for the fourth year in a row.