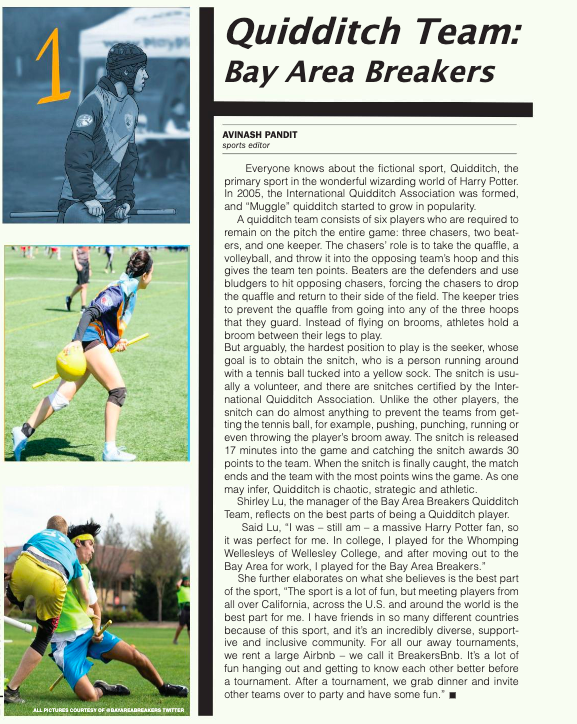 Everyone knows about the fictional sport, Quidditch, the primary sport in the wonderful wizarding world of Harry Potter. But in 2005, the International Quidditch Association was formed, and “Muggle” quidditch started to grow in popularity.

Instead of flying on brooms, athletes hold a broom between their legs to play. A quidditch team consists of six players who are required to remain on the pitch the entire game: three chasers, two beaters, and one keeper. The chasers’ role is to take the quaffle, a volleyball, and throw it into the opposing team’s hoop and this gives the team ten points. Beaters are the defenders and use bludgers to hit opposing chasers, forcing the chasers to drop the quaffle and return to their side of the field. The keeper tries to prevent the quaffle from going into any of the three hoops that they guard.

But arguably, the hardest position to play is the seeker, whose goal is to obtain the snitch, who is a person running around with a tennis ball tucked into a yellow sock. The snitch is usually a volunteer, and there are snitches certified by the International Quidditch Association. Unlike the other players, the snitch can do almost anything to prevent the teams from getting the tennis ball, for example, pushing, punching, running or even throwing the player’s broom away. The snitch is released 17 minutes into the game and catching the snitch awards 30 points to the team. When the snitch is finally caught, the match ends and the team with the most points wins the game. As one may infer, Quidditch is chaotic, strategic and athletic.

Shirley Lu, the manager of the Bay Area Breakers Quidditch Team, reflects on the best parts of being a Quidditch player.

Said Lu, “The sport is a lot of fun, but meeting players from all over California, across the U.S. and around the world is the best part for me. I have friends in so many different countries because of this sport, and it’s an incredibly diverse, supportive and inclusive community. “