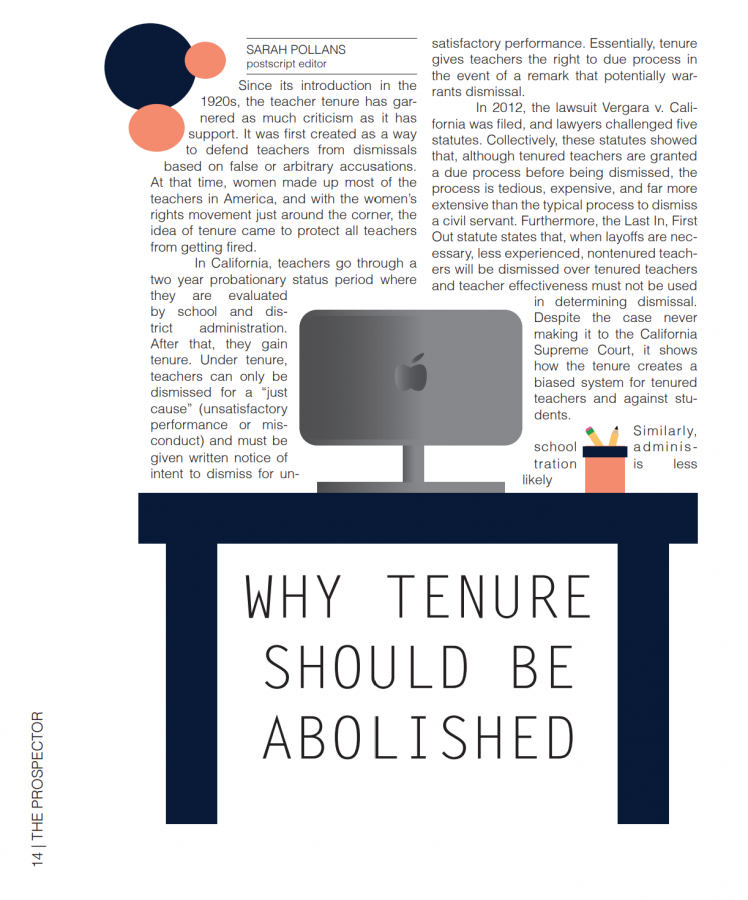 Since its introduction in the 1920s, the teacher tenure has garnered as much criticism as it has support. It was first created as a way to defend teachers from dismissals based on false or arbitrary accusations. At that time, women made up most of the teachers in America, and with the women’s rights movement just around the corner, the idea of tenure came to protect all teachers from getting fired.

In California, teachers go through a two year probationary status period where they are evaluated by school and district administration. After that, they gain tenure. Under tenure, teachers can only be dismissed for a “just cause” (unsatisfactory performance or misconduct) and must be given written notice of intent to dismiss for unsatisfactory performance. Essentially, tenure gives teachers the right to due process in the event of a remark that potentially warrants dismissal.

In 2012, the lawsuit Vergara v. California was filed and lawyers challenged five statutes. Collectively, these statutes showed that, although tenured teachers are granted a due process before being dismissed, the process is tedious, expensive, and far more extensive than the typical process to dismiss a civil servant. Furthermore, the Last In, First Out statute states that, when layoffs are necessary, less experienced, nontenured teachers will be dismissed over tenured teachers and teacher effectiveness must not be used in determining dismissal. Despite the case never making it to the California Supreme Court, it shows how the tenure creates a biased system for tenured teachers and against students.

Similarly, school administration is less likely to discipline a tenured teacher over a probationary one, even if the same offense is committed, as it is understood that it will take a lot more time and money to dismiss a tenured teacher than a nontenured one. Imagine if the same held true for students: An underclassmen getting a harsher punishment than an upperclassman for the same wrongdoing. It simply does not make sense.

As for potential tenure-caused repercussions faced by students, giving teachers tenure can create bad or otherwise complacent teachers. When a teacher gains tenure, though it does not explicitly guarantee lifetime employment, it can take years, and potentially hundreds of thousands of dollars, to dismiss them. With this security, many teachers may realize that they can do the bare minimum and still keep their jobs, as school districts likely will not shell out thousands to fire a complacent tenured teacher.

An ineffective teacher directly affects any student who has that teacher. For an entire year, those students are missing out on the learning all their peers are getting from other teachers, which can potentially result in lower graduation rates, lower college acceptance rates and less income in the future.

But how does tenure create bad teachers? Well, the probationary period in which teachers are evaluated for tenure is only two years in California. This means that after two years, as most K-12 school teachers are granted tenure, teachers have essentially guaranteed jobs (or at least jobs that are extremely difficult to get fired from). However, two years is not that long of a time — definitely not long enough for most to show their full worth as a teacher or, on the flip side, their complacency as one.

An idea that has been repeatedly brought up by supporters of tenure is the fact that the tenure has been used as a sort of scapegoat for the problems academic institutions may be facing, such as overcrowding, underfunding or poor home environments. And while these issues are equally as prevalent to the school, it is correct that banning tenure will not solve all the issues schools are facing today.

But of course it will not. That’s not the point of banning tenure, nor was it the point of creating tenure a near-century ago. Tenures are meant to protect teachers’ jobs. And that it has done, but it has also made it incredibly difficult to dismiss those who are merely doing the bare minimum to secure their job, creating extremely detrimental side effects for the lives of their students.

Those who advocate for tenure say that, as tenure essentially promises job security, it draws more people to the profession and for recruitment. While there is little direct evidence for the counter — that having no tenure discourages people from becoming teachers — there is still a problem with this argument. If people are becoming teachers just for tenure’s sake, it still falls into the realm of creating bad teachers. Even if there is just a select group of teachers in it for the tenure, these teachers will not be as motivated or engaging in the classroom past the probationary period.