Why The Handmaid’s Tale Encourages Misogyny 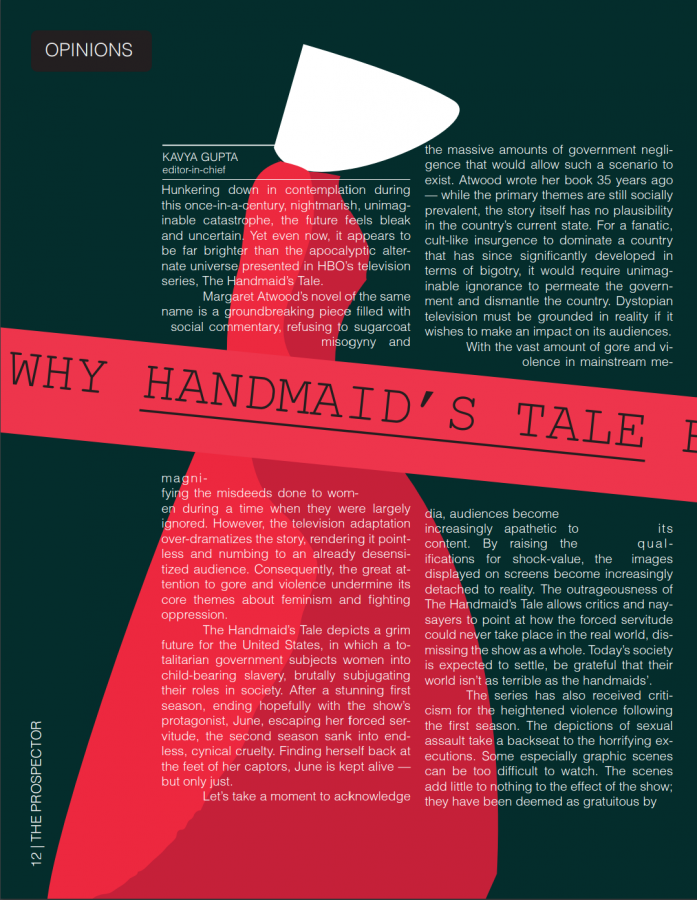 Hunkering down in contemplation during this once-in-a-century, nightmarish, unimaginable catastrophe, the future feels bleak and uncertain. Yet even now, it appears to be far brighter than the apocalyptic alternate universe presented in HBO’s television series, The Handmaid’s Tale.

Margaret Atwood’s novel of the same name is a groundbreaking piece filled with social commentary, refusing to sugarcoat misogyny and magnifying the misdeeds done to women during a time when they were largely ignored. However, the television adaptation over-dramatizes the story, rendering it pointless and numbing to an already desensitized audience. Consequently, the great attention to gore and violence undermine its core themes about feminism and fighting oppression.

The Handmaid’s Tale depicts a grim future for the United States, in which a totalitarian government subjects women into child-bearing slavery, brutally subjugating their roles in society. After a stunning first season, ending hopefully with the show’s protagonist, June, escaping her forced servitude, the second season sank into endless, cynical cruelty. Finding herself back at the feet of her captors, June is kept alive — but only just.

Let’s take a moment to acknowledge the massive amounts of government negligence that would allow such a scenario to exist. Atwood wrote her book 35 years ago — while the primary themes are still socially prevalent, the story itself has no plausibility in the country’s current state. For a fanatic, cult-like insurgence to dominate a country that has since significantly developed in terms of bigotry, it would require unimaginable ignorance to permeate the government and dismantle the country. Dystopian television must be grounded in reality if it wishes to make an impact on its audiences.

With the vast amount of gore and violence in mainstream media, audiences become increasingly apathetic to its content. By raising the qualifications for shock-value, the images displayed on screens become increasingly detached to reality. The outrageousness of The Handmaid’s Tale allows critics and naysayers to point at how the forced servitude could never take place in the real world, dismissing the show as a whole. Today’s society is expected to settle, be grateful that their world isn’t as terrible as the handmaids’.

The series has also received criticism for the heightened violence following the first season. The depictions of sexual assault take a backseat to the horrifying executions. Some especially graphic scenes can be too difficult to watch. The scenes add little to nothing to the effect of the show; they have been deemed as gratuitous by many. Similar to shows like 13 Reasons Why and Game of Thrones, particular scenes have been especially triggering to audiences who have gone through traumatic experiences of their own. The show’s cast and producers defend the violence, claiming that every scene is based on true stories across the world and throughout history. Contrarily, the TV series indeed feature forms of punishment without any basis in reality, suggesting that the producers may not be entirely truthful in their storytelling.

Furthermore, the depiction of women is not empowering, nor is it kind. They are portrayed as weak and vulnerable, and they are never placed in positions of power. The greatest villains on the show are, in fact, women, but even then, they are not the ones with authority. The men in the show almost seem tame compared to their female counterparts. The Handmaid’s Tale is less interested in depicting men as the aggressors than on the women’s role in upholding the patriarchy. Yes, the show is feminist in females fighting against radical oppression, but with the never-ending cycle of torture and pain, the women’s fight feels pointless. It encourages conformity for the sake of staying alive and keeping some small semblance of autonomy.

The show also attempts to sympathize with the villains, giving them detailed backstories and moments of vulnerability. However, the immense dreadfulness of their brutality is difficult to connect to their rare kindness. With the show’s refusal to make any of their villains truly evil, its condemnation of oppression feels feeble. Perhaps it would do better to denounce the dehumanizing acts committed against the protagonists by allowing the villains to get the comeuppance they deserve.

To hold The Handmaid’s Tale as a prophetic warning for the future is genuinely ridiculous. Many have drawn comparisons to the recent draconian measures taken against abortion, claiming that the bans are the gateway to the events of the show. In the worst-case scenario, many American women will lose access to abortion, which is deplorable. However, it is not nearly comparable to a dystopia with forced surrogacy via rape. In fact, several states, including California, Nevada, and Massachusetts, where The Handmaid’s Tale is set, have moved to expand abortion rights. Furthermore, Poland has a near-total abortion ban, as did Ireland until recently, but both countries consistently rank higher than the U.S. on the United Nations gender inequality index.

In The Handmaid’s Tale’s binary world, men are either misogynistic control freaks, while women are either dupes of the patriarchy or helpless victims. The real world is far more intricate and developed than depicted in the show. Dystopian media based in ideology, rather than observed reality, rarely hit the mark, and HBO’s adaptation is one that doesn’t. If the producers were to pare down the drama and bring the story much closer to home, the show could make a significant impact on the world.