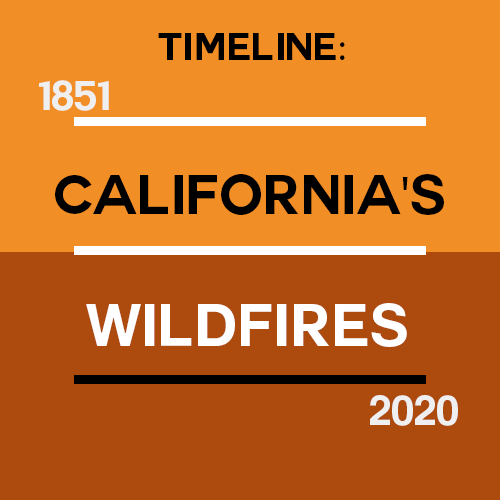 Every year since 2016, the wildfires in California are named the “greatest in history,” only for a more destructive wildfire to arrive the following year. The wildfires last season were thought to be the most catastrophic season, only for them this year to be even bigger, leaving extensive burn scars of charred land across California.

Wildfires in California often occur due to the dry climate of the state. As vegetation dries out, it becomes more prone to ignite. In recent years, California’s temperature has been steadily increasing, stripping vegetation of moisture. This is one of the significant reasons why recent wildfires have been larger than its predecessors.

In 2018, the Mendocino Complex Fire, which was the largest California wildfire in history, burnt across 459,123 acres. The wildfire left massive burn scars in over 700 square miles of land.

This year, the wildfires in Northern California were ignited due to a rare lightning siege on August 17. The dry lightning, caused by the colliding weather systems, has now started hundreds of wildfires, and over one million acres has burned since. According to the San Francisco Chronicle, three of the recent wildfires- SCU Lightning Complex, LNU Lightning Complex and August Complex are among four of the largest California wildfires in history.

“When the [lightning] storm rolled through, I woke up, and was listening to it. One of the things I was listening for was rain. With a thunderstorm like that, I expected a torrential downpour, and to hear only a pitter patter of rain, was honestly concerning.” said Cupertino High School teacher Ashley Hooper.

Living in East San Jose, Hooper was close to getting evacuated due to the fire coming nearby.

Said Hooper, “In the years past, I wouldn’t have been as worried as the years past, but it [reminded] me of the fire in Santa Rosa. It made me think back to that, because [the lightning complex] felt like a different type of fire. It was the idea that the homes that are not built-in fire-prone areas were at risk. That was really scary to see.”

The wildfires being more immense this season put even more workload onto the firefighters.

Said Bryan Ronalter, a firefighter for the Santa Clara County, “It is very strenuous hard work, and it also requires a great deal of teamwork. Many firefighters work together to protect life, property, and the environment; in that order. We keep each other in good spirits because we are always planning for the long haul.  It is always a marathon fighting these fires nowadays, and it’s all about pacing yourself.”

The fires this season may be record-breaking, but it will not be a surprise if the fires next season will overcome it.