Political Advertisements Should be allowed on Social Media 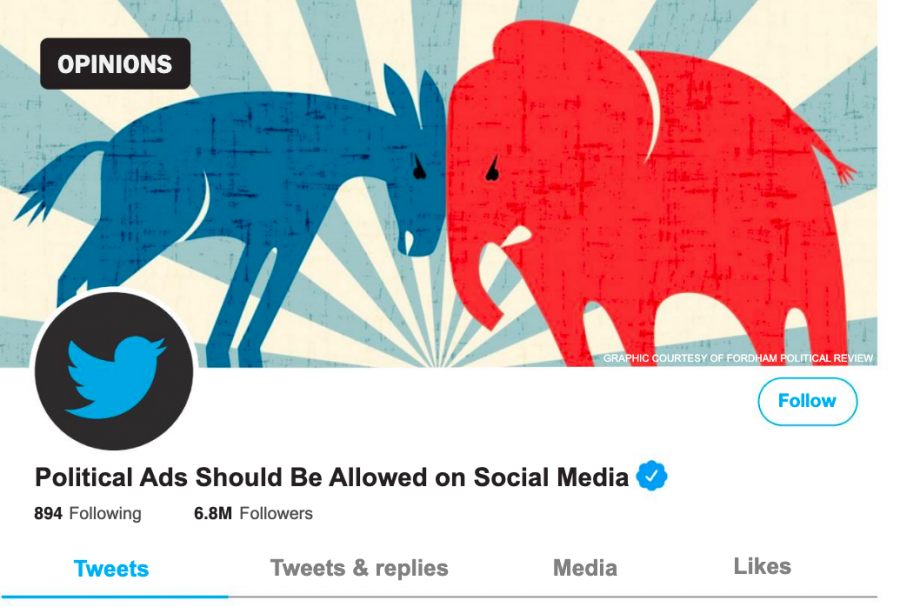 In response to the upcoming 2020 presidential election, several social media companies have changed their policies on political advertisements. The spearhead of this change has been Twitter, which back in October of 2019 announced that it would ban all political ads.

Said Twitter CEO Jack Dorsey, “We’ve made the decision to stop all political advertising on Twitter globally. We believe political message reach should be earned, not bought.”

However, certain companies—mainly FaceBook—have decided to allow political ads to be displayed on their platforms. In FaceBook’s case, their decision has resulted in severe backlash from both users and employees.

While there is a reason for concern with having a stream of political ads on social media platforms, these ads should be allowed since there are a multitude of ways to handle misinformation in ads. For example, FaceBook has an option for users to turn off political advertisements. However, more importantly, advertisements have been banned due to ethical reasons—but when the situations are carefully analyzed, the ethical problems that are solved by this prohibition are sparse.

Beginning with Dorsey’s remark about banning political ads, there are evident flaws in the logic being used. As Dorsey said, Twitter “believe[s] political message reach should be earned, not bought.”

However, the money used to pay for ads comes from the political campaign fund, which accumulates donations from supporters, super PACs, and various private committees, including the Democratic and Republic National Committees. To put the sheer amount of donations into perspective, President Donald Trump has raised $1.21 billion for his presidential campaign. Former Vice President Joe Biden has raised $699 million for his presidential campaign. This is more than enough to fund an advertisement. A significant amount of the funds come from committees and corporations that support the presidential nominee, and they have the right to donate to the cause they believe in. If the money used for these political ads comes from supporters, then all benefits from the ads, including the “political reach” Dorsey mentioned, have been earned.

Along with this, there are no existing government regulations for what social media companies should do for political advertisements. If political ads are going to increase the corporation’s revenue and are approved by the government, it is only logical that the corporation will choose to accept those ads.

Said FaceBook’s Director of Product Management Rob Leathern, “In the absence of regulation, Facebook and other companies are left to design their own policies. […] We based ours on the principle that people should be able to hear from those who wish to lead them, warts and all, and that what they say should be scrutinized and debated in public.”

There are two crucial points to pull from his words. First, hearing from the candidates. This is vital for voters to form opinions about the people who will be running the country they live in. Second, there are no government guidelines for what a corporation is supposed to do with political ads. While there have been court hearings about political ads, including the infamous match up between Representative Alexandria Ocasio Cortez and FaceBook CEO Mark Zuckerberg, the government’s opinion holds very little weight if they do not have explicit guidelines companies are required to follow. Thus, companies are free to do as they please with advertisements legally, and as a corporation, they will naturally choose the more lucrative route.

Another point that should be considered is how ethical it is to refuse all political ads. While certain ads might contain misinformation or be slanderous, there are most certainly several political ads that are valid and should be promoted. However, a consistent refutation to this claim is that since they are corporations with full ownership of their platform, it is up to them who they sell the advertisements to. While this is true, Twitter and other social media platforms that have prohibited political ads allow people to post political opinions, so buying an advertisement to spread the same message should be allowed as well. For example, both Former Vice President Joe Biden and President Donald Trump have Twitter accounts just to post the same content as they would put in an advertisement. If the opinions are already on the forum, prohibiting ads is useless, and the better option would be to make a decision that will help their business.

In this article, it has been frequently stated that corporations should put ethics first, but if ethical standards are met they can then base decisions on how it will benefit the company. However, the idea of a corporation putting ethics first might sound unrealistic. Even so, companies that are keeping ads have made it clear that there is no substantial monetary gain in keeping political ads, so there is little reason to worry about a corporation disregarding ethics for greed.

For example, FaceBook makes approximately $66 billion a year in total revenue and will make roughly $330 million for political ads, which is 0.5% of yearly income. For a social media empire such as FaceBook, that is an easy loss to swallow, so even if FaceBook were to put its company growth over ethics, this would not be heavily reflected in its ads.

This year’s presidential election has opened up a vast array of opinions on the ethical, political, and economic standards on which a company should base its political advertisement policies. It is crucial to understand both sides of the argument and understand that the idea of keeping political ads is not as conniving and greedy as it is made out to be. It is legal, the monetary benefits are not substantial enough for revenue to play an influential role in decisions, and any benefits from the ads have been rightfully earned.