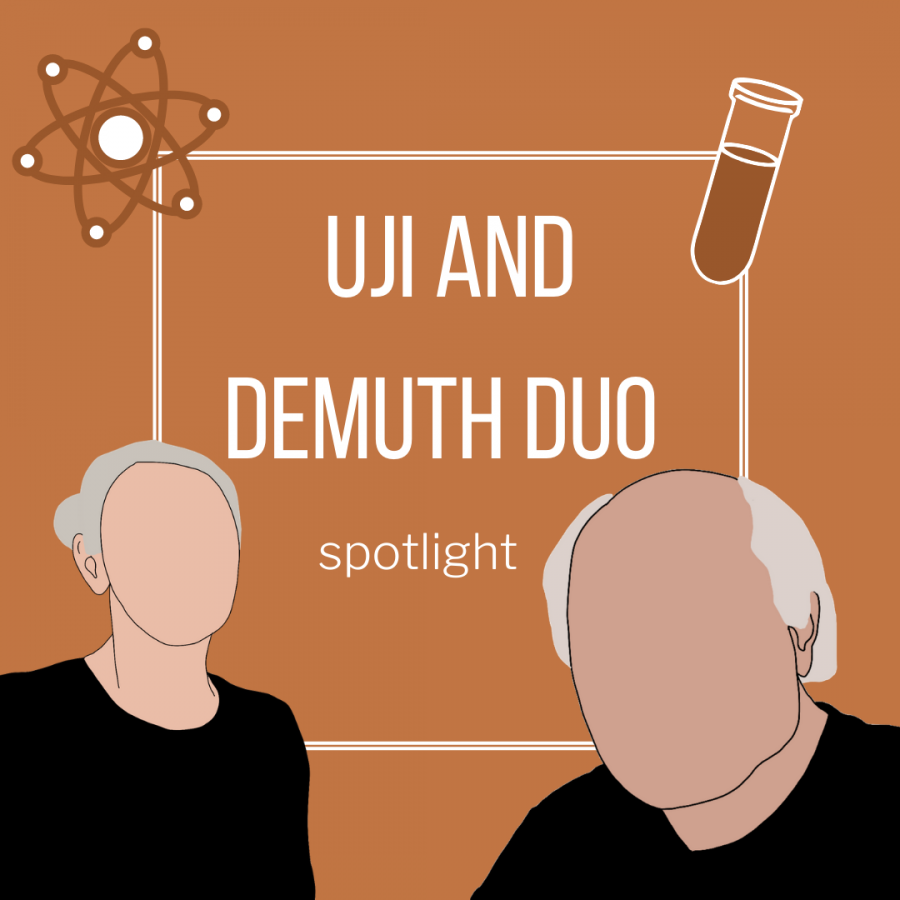 Ujifusa started teaching at CHS in the 1992-1993 school year, having taught at Monta Vista for four years prior. DeMuth joined the staff as a student-teacher the following year, eventually getting hired after the science department chair’s departure. Both recall the friendly atmosphere of the school when they joined.

Said Ujifusa, “When I first started teaching [at CHS] I really loved it, because there was a teacher group that had been there a really long time that were really close with each other. They would accept [new teachers] in and help and teach you.”

Adds DeMuth, “Cupertino was known to have the best staff in the district. We were like one big family, and we had big Christmas parties. Barbara Nunes [former principal] made a huge effort to make sure everyone got to know each other. […] Uji and I were new teachers on the block. The other teachers had been here for 25 years, and they took us under their wings.”

However, being a new teacher was far from a cakewalk for Ujifusa and DeMuth.

Said Ujifusa, “It was hard because I had to teach Chem Honors. I’d never set up a chem lab before and had to figure out chemistry myself. I also taught Chem Honors by myself. Often, parents would come by and help and mix chemicals. [,..] It was hard to figure out by myself; I hurt my eyes one day because I didn’t know I had to open the hydrochloric acid bottles in the fume hood, so I just opened it, and the fumes hit my eyes and I was like ‘Oh, that was a bad idea!'”

Both Ujifusa and DeMuth have witnessed a large number of changes undergone by CHS. When both first started teaching, freshman bio wasn’t even a class – freshmen were required to take a science class known as ISC.

“ISC was freshman science. It was holistic and all-encompassing; it had bio and chem and physics, as well as an emphasis on inquiry and experimentation,” said Ujifusa.

Ujifusa and DeMuth also see a difference in the expectations placed on students.

“Kids have always been kids. I loved the kids back then; I love the kids now. One of the things that have changed is expectations. There are so many expectations [on students now], so much so that you can’t have fun,” said DeMuth.

This concern for the heavy expectations on students was the reason CHS was one of the last schools to begin offering AP science classes.

“There was a big movement for AP Chemistry, but we were concerned about the expectations that would be placed on students,” said DeMuth.

Added Ujifusa, “We had no AP classes in science, and physiology was the hardest science class. […] Students signed petitions for AP chemistry, and we met with the PTA to say ‘You don’t want it!'”

Eventually, AP science classes were introduced; CHS was the last school in the district to offer these classes to students.

In addition to their contributions in the classroom, Ujifusa and DeMuth have had an immeasurable impact on CHS’s swim program. In fact, DeMuth began coaching the program his first year as a teacher, coaching frosh-soph boys water polo, varsity boys water polo, JV swimming and varsity swimming.

Said DeMuth, “I ended up [at CHS] because of water polo. They wanted to put me at Monta Vista […] and I said ‘No, I’d like to come to CHS.’ The deal was that I coach. I asked my son to grab a bunch of friends to play water polo. […] At the very beginning, I asked them what their goal was, and they said they wanted to make CCS.”

After a lot of hard work, DeMuth and the team were able to meet this goal.

“We practiced year-round, with only a one or two week break. The kids worked their tails off; […] they really really followed through and committed. […] The team won CCS in their senior year. They also forged a work ethic, and modeled what it took to be an athlete and student because I made them keep up with their schoolwork too,” said DeMuth.

Said Ujifusa, “The newer swim coaches would often recruit the old coach to help with swim meets. When Mr. DeMuth quit coaching to teach AP Chem, he still helped out with the swim meets. For me, my kids all swam, so I started helping out with swim meets too, Now, Mr. Stavis and Ms. Ripp are helping out too; […] pretty much the whole science department helps out during swim meets.”

This tradition of helping out during swim meets is not the only tradition that Ujifusa and DeMuth have started and been a part of during their time at CHS. Students who have taken AP Biology, for example, cite the weekly stretching routine they participate in before essays as one of the best parts of the class.

Ujifusa and DeMuth, however, are most proud of the science department TAs at CHS.

“The science TA department is a huge tradition at CHS. We’re really proud of the fact that so many people work and give back to our current students. The kids really want to work with us; there are so many people!” said DeMuth.

Ultimately, Ujifusa and DeMuth agree that the thing they love most about CHS is the students.

“Students are the reason why we’re here. […] The students here are better and nicer. […] We feel very fortunate to have the opportunity to teach here. In our time at CHS, we’ve worked with about five thousand kids [each], and they’re all such special kids,” said DeMuth.

Adds Ujifusa, “They try not to get stressed. They are conscious of the rigor [of the curriculum]. When we come here over the summer, we always say to each other, ‘It’s empty here without students, it’s like an empty shell.'”