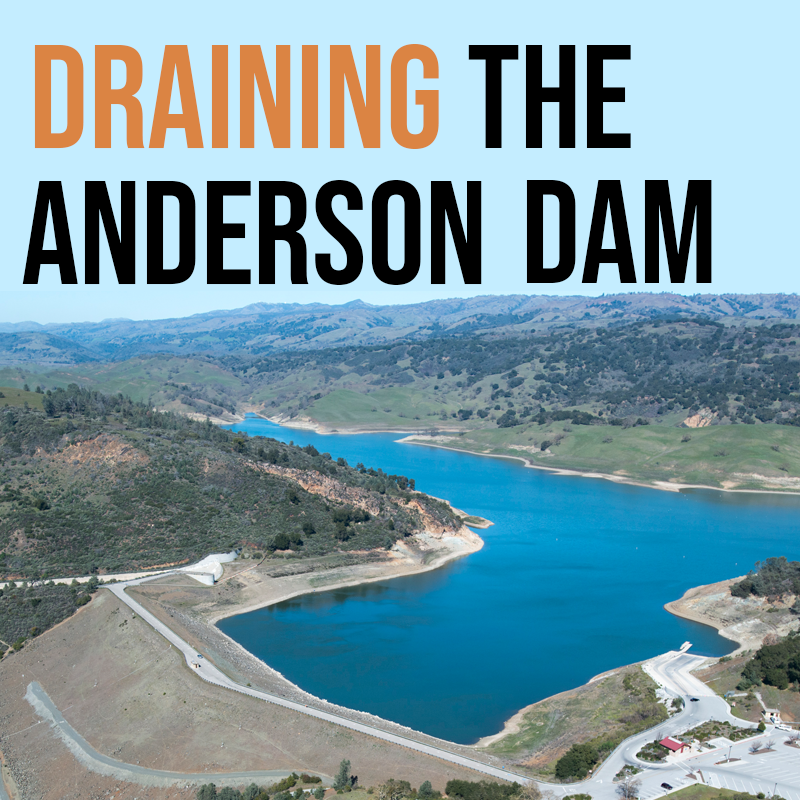 Anderson Dam will be torn down and reconstructed over the next ten years. The dam is Santa Clara County’s largest reservoir, located in San Jose, Calif. It was built in 1950 to create a surface water reservoir to provide for the county’s water needs. It dams Coyote Creek near its conjunction with San Felipe Creek, and the artificial lake holds over a hundred million cubic meters of water when full. Due to seismic concerns, the dam currently contains around 58 percent of its capacity.

A project began on October 1st to tear down and rebuild the dam. The project is budgeted at $576 million, though some predictions say it will cost over a billion dollars. The project is expected to take ten years, finishing in 2030. Considerations such as environmental review have extended the expected time period. Draining the dam itself could take up to six months, though it hasn’t been at full capacity since 2009 due to safety concerns. Several other lakes in the Bay Area are being drained due to similar seismic safety concerns involving their dams.

Its sheer size and age combined with the higher levels of seismic activity in the Bay Area make it a target for earthquakes. State authorities determined in 2009 that the dam will not withstand a major earthquake. If an earthquake does happen, the dam will crash on the Morgan Hill and Coyote Creek communities, submerging Morgan Hill in water. Along with earthquake concerns, flooding also has the potential to cause problems. If rainfall causes the dam’s water level to rise above its peak capacity, the water spills over and reaches neighboring communities. The most recent flooding was in 2017 due to unusually heavy rainfall in the Coyote Creek community, keeping safety concerns about the dam fresh in residents’ minds. The city also plans to restructure water infrastructure along the Hayward Fault soon.

The district currently provides water for two million people in Santa Clara County. Officials have reassured residents that the water loss in the reservoir after draining will not cause shortages in the area. Much of the county’s water will come from underground sources such as aquifers and the district’s currently stored water.

Although the purpose of draining the dam is to increase public safety, resident opinion varies. Some are pleased that the county is finally making progress on safety considerations and protecting the residents in the dam’s neighboring communities. However, 2030 is far enough away that many feel the project’s downsides more acutely than the positives. Some are upset about potential landslides, the community disturbance and property value depreciation from consistent construction, and the loss of water for firefighters in case of an emergency.