Declining Faith in the Supreme Court 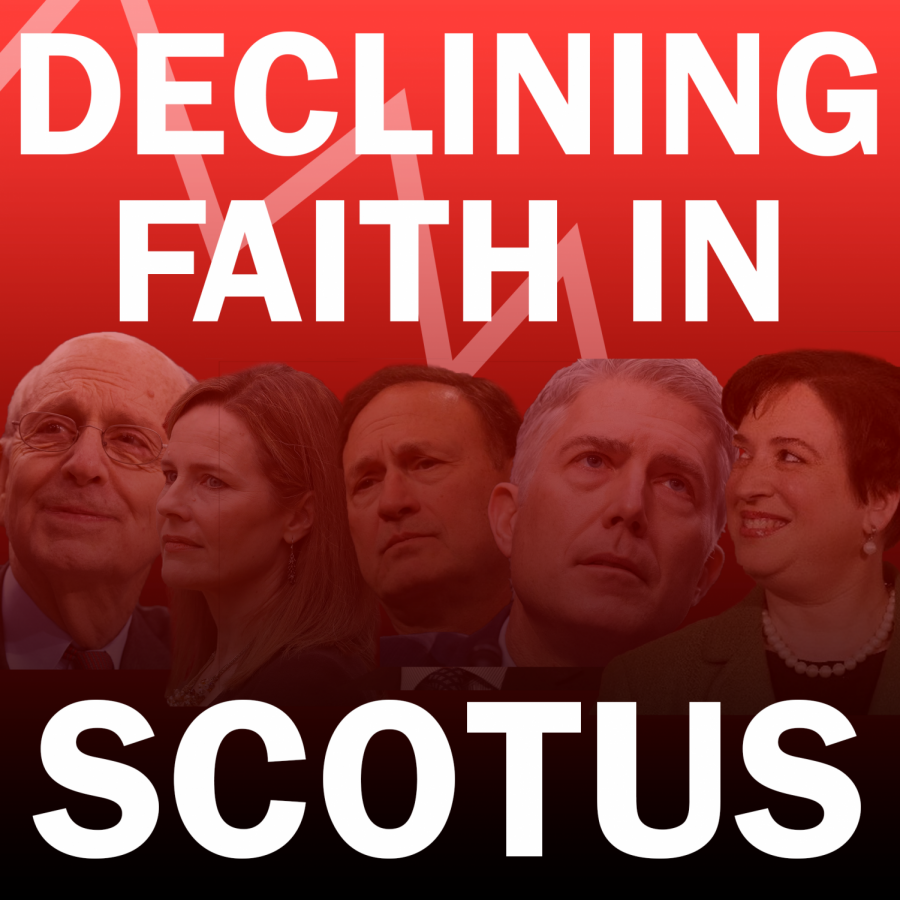 In the wake of controversial emergency decisions and an extreme partisan skew, a new Gallup poll shows public approval of the Supreme Court at its lowest in decades.

Just 40% of Americans surveyed reported approving of the Supreme Court. Although the poll has only been running since 2001, this marks a two-decade low mark. More surprisingly, the trend holds across political demographics. Less than half of Republicans approve of the Court, and the numbers are even lower among independents and Democrats.

In isolation, this number represents only a temporary dip: approval in the Court decreased drastically — 18 percentage points — in just one year. However, this recent disapproval is just a fraction of a much longer-term trend of public opinion about the Supreme Court. In the two decades since the poll started, public approval has, on average, gradually declined.

The recent dip is likely the result of a slate of unpopular decisions, positions and emergency orders recently issued by the Court. Chief among these is their decision not to prevent a Texas law enabling citizens to turn in women seeking abortions after six weeks of pregnancy. The order, made without a full merits hearing or representative lawyers, received widespread negative public attention. Given that, according to Gallup, well over half of the U.S. supports Roe v. Wade, the decision came as a blow to the Supreme Court’s legitimacy as an institution.

Similar orders have received criticism in recent years. The Supreme Court has dramatically increased their use of the “shadow docket” — any order or decision made without a full hearing — to decide important Constitutional questions on substantive issues. On topics as diverse as freedom of religion during COVID-19 and the death penalty, the Supreme Court has handed down unsigned decisions to overturn lower courts’ decisions, generally with little explanation of the reasoning. This use of the shadow docket decreases the transparency of the opaque and exclusive Supreme Court, further eroding public trust in the Court’s judgment.

The problems only compound when the Supreme Court tackles partisan issues. The public assumes that the justices of the Court will set aside their political affiliations on the bench. This expectation, only created after the 1930s, has eroded recently as well. Decisions like Bush v. Gore, effectively declaring a Republican president in 2000, started the process. Perceived partisanship has only increased since then, especially with cases concerning politically polarized issues like the Voting Rights Act and immigration. As justices’ opinions on cases continue to reaffirm the political beliefs of either Democrats or Republicans, with little fence-hopping, the Court loses its aura of detached legitimacy.

In California, especially in the extraordinarily liberal Bay Area, the Supreme Court has received its fair share of criticism. Local protests in support of abortion rights directly target the Supreme Court’s handling of the Texas abortion law and a similar Mississippi ban for abortions after 15 weeks. A recent immigration protest that blocked the Golden Gate Bridge, although aimed primarily at Congress, was deeply intertwined with recent Supreme Court decisions on immigration and Dreamers.

The Court’s power comes from its ability to base its decisions on sound judicial philosophy and thus convince lower courts and other branches of government to execute its orders. Losing that confidence is a gradual process, nowhere near a breaking point yet. Still, as the Supreme Court makes public pretenses of their unbiased judicial philosophies while abandoning transparency on one hand and bipartisanship on the other, it is unclear whether the situation will improve. The Supreme Court was created to be detached from the extreme or temporary impulses of public life; as it grows more detached, we have no one but the Constitution to blame.