The Ethicality of Animal Dissections 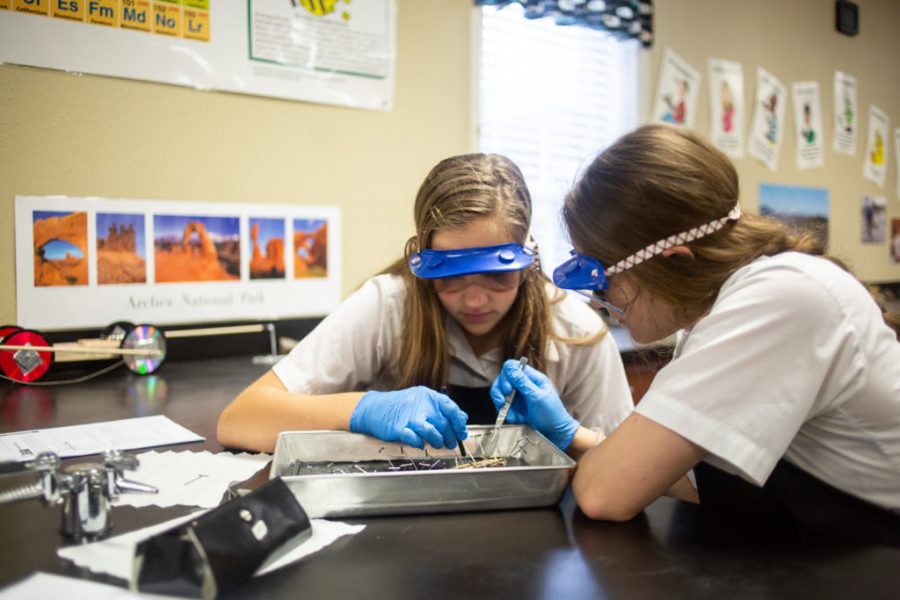 Animal dissection is a common activity performed in high school biology classes across North America, typically involving pigs, frogs, mice, or worms. However, with over twelve million animals used for dissection each year, the widespread practice has gathered substantial opposition, especially towards the ethics of the issue. Growing concern over the ethicality of dissection, as well as developing technology allowing for cruelty-free alternatives has raised the question in many school districts across the country: should dissection be removed from school curriculums?

Animal dissections are an overall beneficial and productive use of dead animals, given that they are utilized and sourced under ethical conditions. The skills learned by students through performing dissections are valuable assets to them even after leaving an academic environment and are not easily replaced with alternative methods.

For students at Cupertino High School, one of the most memorable parts of their freshman experience is the fetal pig dissection. The dissection allows students to establish concepts learned throughout the school year, such as genetics or population. A component of the dissection involves removing the heart of the fetal pig.  The hearts are then be measured, weighed, and compared with data from peers to answer critical questions related to variation and natural selection learned in earlier units.

Said Andrew Goldenkranz, who teaches ninth-grade biology, “So we can establish everything we’ve learned about populations in either genetics or evolution, but you can only do that when you have a population of pigs that you’re working with.”

Moreover, the anatomical similarity of pigs compared to humans makes them the ideal specimen to learn about human anatomy. While only a minority of students choose to go into a healthcare profession, everyone will struggle with illness at some point in their lives. Through the study of fetal pigs, students can deepen their understanding of human health and physiology.

The practice of procedures done in real life inspires students to pursue careers in the science and medical fields, which can help shift the perspectives of students who might not have considered themselves academically oriented.

Said Goldenkranz, “Students who sometimes don’t excel in other academic ways, like they’re not always good at the paper and pencil stuff, those students really step up and are super good around a hands-on activity like the pigs […] The multi-sensory nature of it is really worthwhile because it brings out strengths in the kids that we don’t usually see.”

The dissection also allows students to develop fine motor skills not typically taught in a classroom setting. Through handling scalpels, using chemicals and looking at samples through a microscope, students can practice hand-eye coordination and attention to detail, which are valuable skills that will stick with them even after leaving an academic environment.

Despite the benefits, many students choose not to participate in the dissection. Whether it is because of a conscientious objection to dissection or personal reasons regarding health or religion, the school allows students the right to opt-out of dissections, although it is uncommon. According to Goldenkranz, out of roughly 600 students across the department, four to five students choose not to participate. Students who opt out of dissections are given alternatives, such as being observers rather than dissectors.

The most controversial aspect of animal dissection is the sources of the animals used. There is a stark moral distinction between growing animals for the sake of study and utilizing animals or animal parts that would otherwise have gone to waste; the former is inhumane and unethical, but the latter is a productive use of unwanted animals and can lead to scientific contributions. In the case of the fetal pig dissection, the pigs come from one of two supply houses located in Illinois and North Carolina, depending on the yearly pricing and availability. These supply houses have contracts with big farms in other parts of the country, who supply them with stillborn offspring from farmed pigs. An important distinction lies in the pig’s condition at birth; if the pigs were being harvested alive specifically for the sake of lab dissections, that would be strictly unethical and should be put out of practice. However, here at CHS, the pigs used are stillborn and pronounced dead at birth. Dissection is the most practical and productive use of their bodies instead of  being used in dog food or fertilizer.

In the Physiology curriculum, individual organ dissections are done instead, including heart and brain dissections. These organs are a byproduct of factory farming animal production in the United States, where livestock organ waste is abundant. Dissecting these organs provides learning opportunities by utilizing unwanted animal parts.

Interestingly, In the Fremont Union High School District, ethics are not a significant factor in dissection in the biology curriculum. According to Goldenkranz, the topic has not yet been brought up among the science departments. However, in other districts, some schools are turning to alternatives to animal dissection, albeit more due to a lack of time and resources than moral concerns.

Said Goldenkranz, “Depending on the lab facilities and resources that a school has, you know, our most precious resource is always time. So we want to make sure that if we’re going to dedicate time to that part of the unit that we’re getting out of it what we want.”

Opposition to classroom dissections has brought up debates about substitute methods. The rapidly advancing technology industry has created numerous alternatives to animal dissection over the past few decades. Virtual simulations, 3D anatomy models and dissection videos are all perfectly valid means for students to learn the content of anatomy. However, these alternatives lack hands-on components, which can deprive students of valuable expertise.

“The skill of asking questions, of understanding the model, of constructing explanations, that’s harder to do in simulation[s], so doing it in real life gives us some real advantages,” said Goldenkranz.

Furthermore, students who have performed the fetal pig dissection report overall positive takeaways from the experience.

Said Viva Parmar, a senior at CHS, “It has really given me more hands-on experience with science. Ever since I performed my first dissection, I’ve been really interested in biology and I am interested in pursuing it as a future career option.”

Given their numerous academic benefits for students, animal dissections under ethical circumstances are a worthwhile use of unwanted animal parts and should remain in biology curricula across North America.

While the primary aim of dissection is to give students hands-on experience with animal anatomy, scholars inquire how students internalize the practice – that is, what attitudes and values may be transferred through it. Dissection can promote a decreased sensitivity toward animal life and individual or ethical discomfort. (Barr, G., & Herzog, H. (2000). Fetal pig: The High School Dissection Experience. Society & Animals, 8(1), 6.) This can desensitize students to animal testing. Teachers from the study have observed many middle school students perform the concerning act of “recreational mutilation.” This promotes animal persecution and human negligence.

In addition to the animals mutilated in dissection, an immeasurable number of live mice, rabbits, rats, turtles, and other animals are tortured and killed in crude university-level biology and psychology demonstrations. Poisoning, shocking, burning, and killing animals are daily tasks for vivisectors. If these atrocious acts that occur during animal testing were performed outside laboratories, they would be considered felonies. But animals suffer and die every day in laboratories with minimal or no protection.

With millions of animals’ lives on the line, purchasing animals for dissection is an economically significant business. Through investigations into biological supply companies – which sell animal bodies and parts – People for the Ethical Treatment of Animals (PETA) has uncovered acts of cruelty to animals, including the drowning of rabbits and the embalming of cats while they were still living. The unethical supply of animals sold in the booming industry reduces local populations, generates an imbalance in the ecosystem and decreases biodiversity.

Moreover, many students dislike performing dissections and may even be traumatized by them. According to Cutting Edge Controversy: The Politics of Animal Dissection and Responses to Student Objection by Jan Oakley, in a standard class, 3-5% of students verbally oppose dissection, and a higher number of students silently condemn it.

Due to this, dissecting real animals is unnecessary as synthetic alternatives – such as online virtual dissections – are readily available. These simulations are more cost-effective than the use of real animals. Using alternatives, each body system can be studied and virtually dissected as many times as needed until students are confident with the material, unlike animal dissection, in which each system is uprooted, and the specimen is discarded when the lesson is finished. PETA found that many students find these alternatives effective substitutes. A study published in The American Biology Teacher concluded that one-third of biology students in a data set of 500 preferred to utilize alternatives over animal specimens.

Today, the high school biology curriculum weaves together genetics, evolution, and the relationship of cells to explain environmental symbiosis. Classes no longer leap from photosynthesis to the skeletal system but establish a biotechnology and engineering system foundation. Simulation-based education more accurately reflects what students will encounter when they get to medical school as all U.S. medical schools have abandoned the usage of animals in their standard curriculum. Likewise, the College Board does not require it for AP Biology, the International Baccalaureate for IB Biology or the Next Generation Science Standards.

In order to increase diverse participation in STEM, cultural concerns regarding animal dissections must be acknowledged and addressed. Several cultures, including those of many Native American tribes, consider animal dissection taboo. Lori A. Alvord, the first female Navajo surgeon, said that her “ultimate challenge” in medical school involved human dissection: “Navajos do not touch the dead. Ever. It is one of the strongest rules in our culture” She realized later that she might have requested accommodation to watch rather than actively participate or to make use of computer simulations. However, at the time, she assumed she had no choice but to violate the taboo. A survey from the International Journal of Stem Education found that from 96 students, 50% of the respondents generally observe tribal taboos and 38% would choose not to pursue a science major if they suspected it would require them to violate an important tribal taboo. They discovered 67% would be more inclined to take science classes if the science curricula were more respectful of tribal taboos.

Scrutinizing the practice of animal dissection reveals many multi-faceted concerns. If well implemented, dissection may have several viable merits from an educational standpoint. However, when one considers the associated costs – animal suffering and death in the supply trade, disruption of wild animal populations, desensitization of animal suffering, and cultural taboos – a realization that a more nuanced perspective needs to be fostered. This perspective needs to acknowledge both ethical and cultural perspectives. Ending an animal’s life is not a decision that should be made lightly in the context of today’s science education. This practice necessitates critical reconsideration.