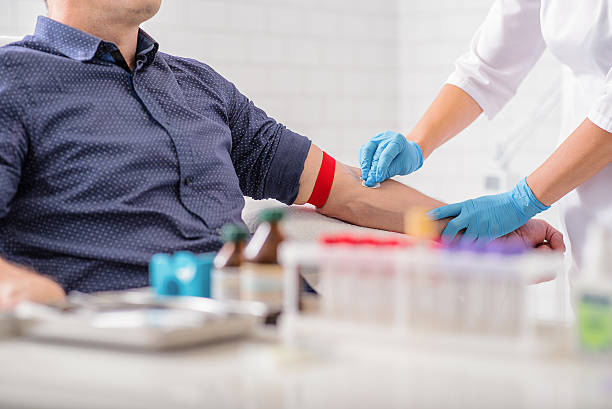 Close up of nurse disinfecting male arm before blood test. Man is sitting on chair near medical set

According to current FDA Revised Recommendations for Reducing the Risk of HIV Transmission by Blood and Blood Products, all legally regulated blood drives are required to  “defer for 3 months from the most recent sexual contact, a man who has had sex with another man during the past 3 months.” This regulation, known as the MSM deferral policy, which has been acknowledged as harmful to the LGBTQ+ community by organizations including the Red Cross, was put in effect at Cupertino High School’s annual blood drive.

X, a senior at Cupertino High School who chose not to share his name out of privacy concerns, was not allowed to donate blood since he had engaged in sexual activity with another man within the past 3 months.

Said X, “there were quite a few questions that asked about if you have come in contact with people who are positive for HIV or if you’re exposed to it, or if you’ve ever had it. I obviously said no to all those questions. But then there was another question asking if you have had any sexual interactions with another man if you are a man, and I had to be honest […] they eventually pulled me aside and told me that I was not eligible to donate blood because of that discrepancy in my medical history.”

HIV and AIDS has been used as a sticking point in the prolonged prejudice against the LGBTQ+ community. Even in Cupertino High School which supports the LGTBQ+ community, regulations such as the MSM Deferral Policy can surprise and upset young LGBTQ+ individuals. While agreeing that precautions must be taken against HIV, the blunt insistence on making sexually active gay men ineligible to donate blood was shocking to X.

Said X, “I still don’t really feel discriminated against in this situation. However, I think it is worth noting that heterosexual individuals could also be unsafe about their sex lives and […] those precautions were not in the questionnaire […] I just find it weird that they targeted us without putting into account the possibility of a heterosexual person also having HIV or other types of transmissible diseases through blood.”

This experience expands past just donating blood; sexuality defines many aspects of a person’s life. The effects on how society perceives them and the opportunities they have is a large part of the complex journey individuals take to understanding their identity and the larger — sometimes unfortunate — implications it has.

Said X, “it was just also pretty eye opening because it made me realize that, like, things like these will be happening to me, throughout the course of my life, living as a gay man. And this isn’t going to be the only situation where I feel uncomfortable, and I feel like I don’t have the same privileges as heterosexual people. I’ve never come across anything like this before and I’m not angry about it. It’s just pretty eye opening.”

LGBTQ+ young adults who experience these jarring examples of the different standards can begin to see their futures differently. Said X, “I didn’t expect it to be so prominent because I knew that society has made its advancements and it has made a lot of progress. And people also just don’t really talk about things like this, which is why I wasn’t expecting it and I did not know that would happen. But I’m now realizing that, you know, not everyone gets to live equally.”

Especially as rapid fire tests for HIV/AIDS have been optimized and are becoming increasingly common, the immediate decision that gay or bisexual men are ineligible to donate blood if they are sexually active strikes many members of the LGBTQ+ community as a relic of a social structure oppressive of LGBTQ+ individuals.

Said X, “I don’t want to question medical experts because I trust them and I trust that they want to be safe, but I’m also wondering why they can’t just give us tests. There’s ways of getting HIV tests in 20 minutes, or just testing the blood that was donated. And seeing as I was very low risk because I am in a monogamous relationship, and I have been safe and I haven’t been exposed to anything like HIV, it just didn’t really make sense to me.”

Nonetheless, X said it was uncomfortable and embarrassing rather than discriminatory and the doctors were genuinely sorry that these were the circumstances. Said X, “they felt bad, but they weren’t the ones to put that regulation in place.”

X explained that the only aspect of the experience that bothered him was how his fellow students were running the blood drive. Said X, “talking about my medical history to a trusted person and then having my classmates asking me about it was just really weird.” He thinks making the process more private would have made the experience less unpleasant.

As a school invested in promoting equity, it is imperative to treat each student with respect regardless of sexuality. One solution is more precautions in place to protect individuals from scenarios such as these which are uncomfortable and possibly negative. For example, said X, “They could have sent us the questionnaire beforehand to tell us at least just tell us in advance. It wouldn’t waste either of our time.”

While schools cannot disobey federal regulations, students rely on them to provide a safe and welcoming space for people of all identities. As Cupertino continues to strive to develop this environment, there must be more precautions put in place to give young, impressionable individuals a softer greeting to harsher rules and a world  — unlike Cupertino — where they are not protected.