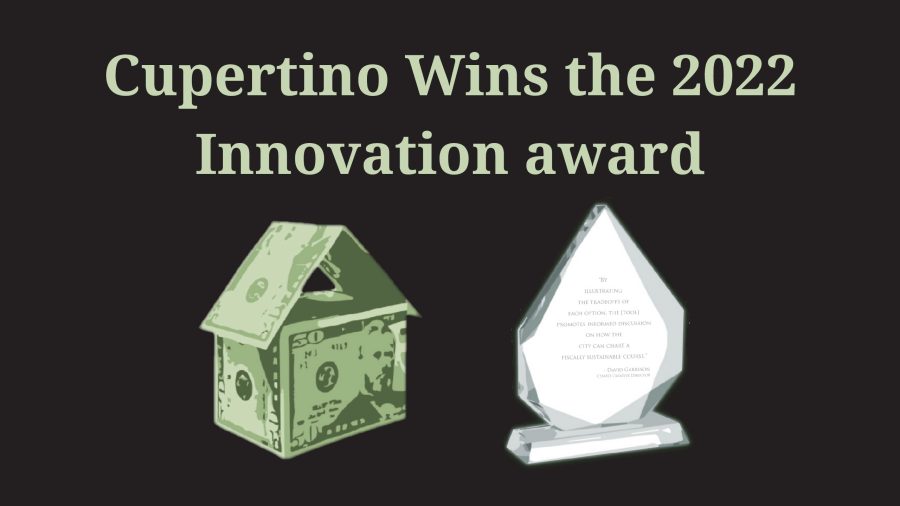 The City of Cupertino recently won the 2022 Innovation Award for its financial transparency and many tools available to residents, factors that can significantly affect how one engages with their city and their quality of life in it.

The Innovation Award was presented to Cupertino by the California Society of Municipal Finance Officers (CSMFO), and “recognizes innovation in public sector finance in a variety of areas, including accounting, treasury, and procurement” (CSMFO).

Essentially, the award is a yearly occurrence that recognizes and ultimately encourages public sectors such as cities, districts or counties to be innovative in  managing and being transparent with their finances. The City of Cupertino was one of three winners in 2022, receiving the award for two tools it created for citizens to gain a deeper understanding of how their taxes are used.

The first of the two tools is a tax calculator for residents, allowing citizens to see the breakdowns of approximately how much they pay in tax and ultimately how this revenue is spent. The tool starts off by prompting users to estimate their spending on items with sales tax, followed by a chart displaying how that sales tax is split up between different bodies of government. From the 9% of tax that citizens pay on goods, the 11% that Cupertino receives is then broken down into specific categories that the revenue is spent on. Categorizing it into revenue by service and expense shows citizens exactly where and how the money from their sales tax is allocated, increasing transparency.

The tax calculator also includes a property tax calculator that organizes estimated property tax values into categories of expenditure. Most of this money goes towards education and county services, with the rest going directly back to the city’s pool from sales tax.

The second tool is a budgeting forecast tool, which demonstrates to users the process of balancing the city budget and allocating spending. This tool poses the situation of the city expecting deficits over the next decade yet still over 120 million dollars in expense requests. With a list of various taxes and options on how to increase them over time, users can gain insight into the major revenue streams of the city. It also poses additional taxes that the city could impose, such as the parcel tax the city has previously attempted to pass.

These visualize the magnitude of how Cupertino’s budget will be impacted each year, for the next 10 years, depending on city expenditures. Users can also pick from a list of special projects that they believe would be beneficial to the city, which provides insight into the difficulty of financing them.

Said CSMFO Creative Director David Garrison, “By illustrating the tradeoffs of each option, the [tool] promotes informed discussion on how the city can chart a fiscally sustainable course.”

Promoting informed discussion is something that ultimately benefits both citizens and the government in improving the city. Citizens are able to easily see how the money from relatively high tax rates are spent, as well as gain an understanding of the difficulty of balancing budgets which can make for more efficient input at places such as town hall meetings.

These tools come in addition to the array of reports already provided on the city’s website, all of which aid in informing citizens and helping the city become a better place to live.