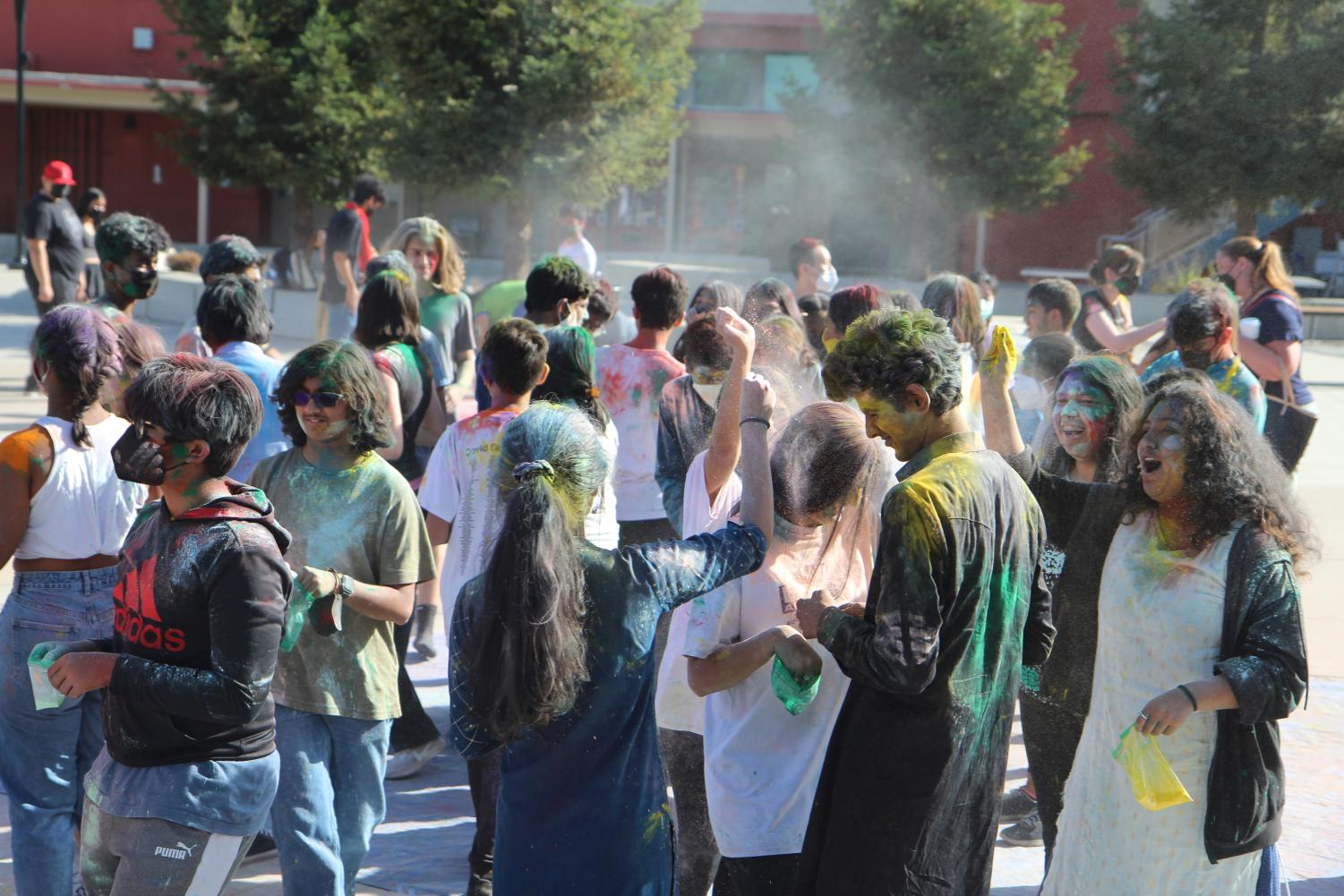 On Friday, March 18th, Cupertino High School’s South Asian Heritage Association, also known as SAHA, held an event to celebrate Holi, the Hindu festival of colors. Despite being an unofficial club, SAHA, in collaboration with Tino ICAA, managed to have a large turnout. SAHA Presidents Samarth Mehta and Rhea Bhatia speak about their experiences organizing for the event.

Q: Why did SAHA initially want to plan the Holi event?

Bhatia: Holi is a really big event, especially in India. For Diwali, we weren’t able to do a big scale [event]. We wanted to have one event this year to really solidify our place on campus and allow people to celebrate.

Mehta: I think, especially because like Holi is an event where a lot of people can kind of come in and have some fun. And we thought that that would be very accessible to people who even just wanted to start learning about the culture.

Q: What was it like planning for the Holi event? Were there a lot of difficulties considering that SAHA is an unofficial club on campus?

Mehta: Yeah, considering we didn’t even know where we’re gonna get the event until like a little bit less than like a week from the day that we want to do the event. Because we’re not an official club, we have to go directly to Ms. Tomberlain. [Doing so] took some time to get to talk to her. But I think once we actually had stuff, like once we had like, solid things, like we knew we’re gonna have the quad, it was easier, because we could just go ahead and do what we wanted.

Bhatia: Yeah, figuring out the initial logistics was hard. But once you got it figured out, a lot of our club team was really eager to help with planning. So once that was settled, it was pretty easy.

Q: What were some highlights from holding the event?

Mehta: I think a lot of staff came out. And that was really good.

Bhatia: It was also really cool to see non South Asian students taking part of it, because we had thought that it was only going to be like South Asian kids, but their love kids from outside to culture playing too.

Mehta: We were not expecting, like more than like 40 or 50 people, so we got a lot more support than we expected.

Q: What was it like seeing the positive feedback from the event?

Bhatia: It was really encouraging because at the start of the year, we faced a lot of pushback. It was difficult to get people to show up to the meeting, so it’s nice to see that people did have an interest in what we’re trying to do.

Mehta: I think feeding off of that, I think it was really reassuring to know that people wanted this club, because in a lot of our meetings, maybe like five, six people show up most of the time. We were like, ‘Why are we even doing this? Do people even want this? Are we trying to fight the battle that nobody needs?’ But I think the Holi event showed us that people want this, I think there was a lack of support around us, like being able to advertise places. And all that was what’s the barrier. It felt like a really affirming validation of our efforts that like, our fight with trying to get this to be a thing was worth it.

Bhatia: It’s been a really positive thing to see how many people believe in this, because initially, when we were starting out, we had a group of like 10-15 people that thought [the event] would be a good idea. It’s been really nice seeing those numbers increase and that, like, our efforts weren’t for nothing.

Q: What has it been like operating as an unofficial club on campus this year?

Bhatia: First off promotion wise, we get nothing. We [have any club related] announcements or anything. Luckily, we’ve been able to have Ms. Tomberlin put in her email blasts. We don’t have any funding from the school and generally, ASB support.

Mehta: A lot of people from ASB and especially people that interact closely with the club, did try and give some pushback on the event like, ‘Oh, you can’t do this. You can’t do that.’ But we know we talked to Ms. Tomberlain about it.

Q: What would you say SAHA’s mission statement is?

Bhatia: To create a safe space for South Asian people on campus and then help educate people about the culture.

Mehta: So actually, SAHA is a double meaning actually in Sanskrit, the word Sahaba means together. So we want to actually bring people together and be able to support the culture, even people outside of the culture and really bring them into it.

Q: Where do you want SAHA to be in the future?

Bhatia: First, we want to do a lot more events, but something we’ve been discussing a lot this year is volunteering.  We have, like Indian temples, or Bridgewater [in our community] so possible opportunities for volunteering there.

Mehta: We actually have been looking into, like, helping people at the school teach Hindi to other younger kids at certain organizations.

Bhatia: So just on top of our events at the school, we want to do a lot more, you know, community giving back because there is a large South Asian community at the school and we want to be able to do something with that.