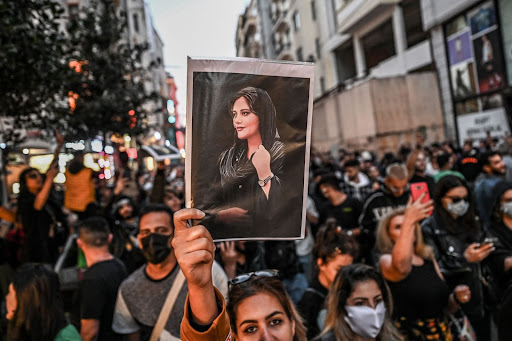 Twenty-two-year-old Mahsa Amini died after being taken into police custody for loosely wearing her hijab on Sept. 16, 2022. Ever since, Iranian women have been fervently protesting for change.

“What governments want for women is they want them to wear something like that, but nobody listens to them,” Farnoush Jalilvand, an Iranian woman who grew up under the regime, said. “When we travel to Iran, what we do is we just put something on top of the hair to just cover part of the hair, and you can wear pants and long sleeves.”

Iranian women are protesting these regulations through defiant actions, like cutting their hair, ripping off their hijabs and burning their hijabs in public demonstrations, often tauntingly in front of the morality police. Although violating the norms set for women is extremely risky, the protests signify Iranians’ emboldening attitudes against the oppressive rule. To better understand these protests, it is essential to consider the politics of Iran, which led to its authoritarian government and strict rules, especially against women. Supreme Leader Ayatollah Ali Khomeini controls Iran’s current regime, with Ebrahim Raisi as president since August 2021. Raisi has enforced increasingly strict rules on women’s attire and behavior because Iran’s government is heavily tied to the country’s religion, Islam — he believes that Iran’s morality relies on women’s compliance with Islamic modesty guidelines.

Amini’s death is not the only example of Iran’s morality police arresting and killing women who fail to comply with their rules. Teenagers such as Nika Shakarami, Asra Panahi, and Abolfazl Adinezadeh have all been murdered by the morality police for participating in anti-government protests.

In particular, Amini’s death was the catalyst for protests by women’s rights activists and other frustrated citizens. Throughout Iran, people are taking to the streets to protest Iran’s sexist laws and women’s unjust deaths and to respond to their declining economy and living conditions caused by a corrupt government.

Iran’s economy has been deteriorating partially due to U.S. sanctions and meager wages. Said Jalilvand, “People are getting poor. Everything is so expensive […] But income is very low.” Iranians are angry at their government for broader reasons which have been building up since the start of the regime. The government’s violence against women was simply the turning point in citizens’ attitudes, leading them to take direct action. Due to the nature of these bold protests, many deem this a revolution, unlike Iran’s protests in previous years. Said Soodeh Mansouri, a UCSB grad student who lived in Iran for 30 years, “In this phase, I think it’s not a revolution. We are in a movement situation or pre-revolutionary situation. But it can be a revolution […] I think it’s the point. It’s the moment that people and this Iranian society failed that should finish everything.” She describes the current protests as pre-revolutionary, though if the government fails to listen and protests continue, that would truly make it a revolution.

Unfortunately, this seems to be the case. Protestors are being murdered in the streets because they want the right to live their lives. They are discreetly taken away by the morality police in ambulances to be beaten or killed at prisons. Some are afraid to leave their homes.

“Women in shawls get paid to go to the street,” said Jalilvand. “So if you want to fight with them, if you scream, if you shout, then two or three of them will catch you, and they will put you in the van, and they will take you […] and they will keep you for hours.”

Children are not safe either; government officials are raiding schools, arresting children who protest and sending them to “psychological centers.” Iranian officials also hold journalists, activists and many others at Evin, a notorious prison in Tehran, Iran. Recently, a fire in Evin injured 61 people and killed eight. Sources stated that Evin officials subject prisoners to torture and poor conditions, with often no access to a lawyer.

The government silences citizens further through nightly internet outages. Their government is scared of what citizens can do with information from outside and how they will spread awareness, so they even created copycat versions of apps like Google and Instagram to prevent citizens from viewing news from outside sources. Said Sarina Nemati, a student at Cupertino High School with family in Iran who traveled there in July 2022, “When I was [in Iran], I had to use a VPN all of the time when I wanted to text my friends.”

Citizens in other countries held protests to spread awareness and fight for Amini and other women that faced similar injustices, including protesters in the Bay Area. On Oct. 17, 2022, protesters in San Francisco held a candle-lit vigil in honor of those killed by the Iranian police, raising awareness about the Tehran prison fire and denouncing the Iranian government’s handling of the protests.

Social media awareness may seem useless in the face of major issues — however, it is the contrary. The more we educate others about the government’s cruel actions toward its citizens, the more scared its politicians will be. Other countries’ support deeply touches Iranians. “And [the Iranian government] cannot ignore the international reaction to their violence,” Mansouri said. “Help us by being our voice.”

Sharing posts on social media is one of the best ways to support Iranians, especially those condemning the government for specific instances of violence. They not only pressure the Iranian government into lessening their violence but also pressure the U.S. government to send more resources — such as internet access — to Iranians. Having a voice is powerful. As videos of protests circulate online and more Iranians share their stories, they have a better chance of succeeding in this revolution.

Everyone needs to do their part and share Iranians’ stories. If other countries will not support Iranians, who will?

The Prospector • Copyright 2023 • FLEX WordPress Theme by SNO • Log in