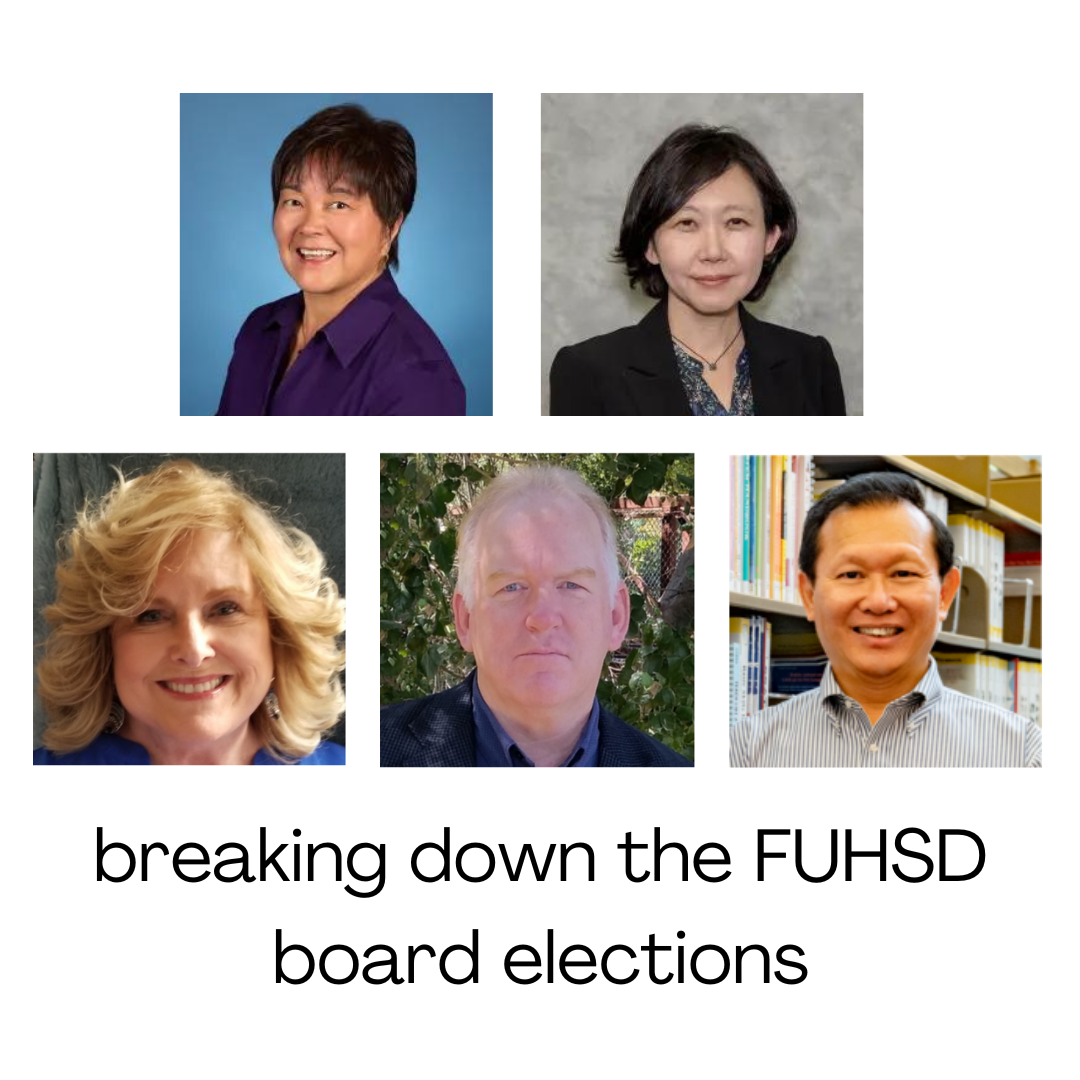 Breaking Down the FUHSD Board Rep Elections

Fremont Union High School District residents will vote on three at-large seats on the Board of Trustees beginning Tuesday, November 8.

The FUHSD Board of Trustees works to ensure that the community’s wishes align with the district’s initiatives, consisting of five elected trustees, one student representative and the district superintendent. Incumbents Rosa Kim and Naomi Nakano-Matsumoto are running for re-election, while Bill Wilson is not.

Kim is Vice President of the board, serving as a Trustee since 2018. She has more than ten years of experience as a teacher, principal at a Silicon Valley Korean language school and as a Homestead alum parent.

If re-elected, Kim said she wants to strengthen student wellness and create an inclusive means of communication. Over the last four years, supporting diverse student groups in FUHSD was a priority for Kim. Said Kim in a candidate forum for the League of Women Voters Cupertino-Sunnyvale, “I truly believe understanding cultural identity is a foundation for our students’ positive self-esteem,”

Nakano-Matsumoto has served as the President of the board since 2018. She is a social worker with experience working for non-profit organizations and school site councils as a parent. She works as the Executive Administrator for Santa Clara County’s District three Supervisor, Otto Lee and previously worked at the YWCA as the Senior Director of Social Justice and the Assistant Director of the Markkula Center for Applied Ethics at Santa Clara University.

She also wants to continue efforts in staff recruitment and retention. Said Nakano-Matsumoto in the LWVCS candidate forum, “With the high cost of living here, we need to keep our excellent staff and teachers, so we can continue to excel and provide the best education for our students.”

Price is currently the Vocational Service Director for Rotary International District 5170 and was previously a university instructor at eight different colleges, including De Anza College and San Jose State University, and the educational officer at Onizuka Air Force Base. Additionally, Price is the CEO of Professional Dynamics, a company that helps other high-tech businesses with management, leadership and communication skills.

In a statement about her campaign on the Silicon Valley Association of Republican Women website, she is running because “schools are now focused on indoctrinating children instead of educating them.”

Her priorities include embracing diversity, age-appropriate curriculum and curriculum transparency for parents.

“I support genuine diversity and understanding it through thought, background [and] culture-taught,” Price said. “The idea of diversity being taught in a very thoughtful way and respectful way that provides an insight in growth and acceptance for everyone.”

Arness is an actor having many minor roles in major films such as “Ant-Man and the Wasp,” “The Matrix Reloaded” and “The Princess Diaries.” He has recently served as a track and field coach at Homestead High School, Monta Vista High School, Archbishop Mitty High School and Saratoga High School. He received the “Coach of the Year” award at Homestead and the “Excellence in Coaching” Award at Monta Vista.

His main priorities include increasing student morale and reducing the amount of homework students receive.

“My biggest concern is the morale of the students,” Arness said in the LWVCS candidate forum. “As I’ve mentioned before in other forums, morale is everything. And having worked with the kids in the district, I know a lot of them are overwhelmed, a lot of them don’t feel like they should belong there, and having those kinds of thoughts and issues. Learning should be fun and rewarding, with lots of great incentives.”

Kou has experience in classroom teaching, educational leadership, and software engineering. He was previously a Senior Software Designer at Hewlett-Packard before getting involved in education.

His priorities include ensuring every student reaches their academic potential, protecting student health and supporting student success through a partnership with parents, teachers and schools. He also strives for a stronger relationship between the cities within FUHSD.

“Fremont Union High School District community is diversified among six silicon valley cities, including Sunnyvale, Cupertino, Santa Clara, West San Jose and Los Altos,” Kou said at the LWVCS candidate forum. “Each of the communities has different value and goals of the education, that we should listen and help to meet their expectations for their students.”